Yesterday, March 31, 2013, Illinois decided to rejoin the United States of America and pass a law allowing citizens to “bear arms”.  And as John Godfrey Saxe said in 1869 “Laws, like sausages, cease to inspire respect in proportion as we know how they are made.”

And of course, H.W. Brands said, “In politics, differences of opinion are rarely resolved and almost never definitively; in politics the best outcomes are typically compromises that leave all parties grumbling.” (Page 2 “The Man Who Saved The Union Ulysses Grant In War and Peace)

The CCW permit will be too expensive, both for residents and non-residents (prohibitively for the latter, I think).  The law won’t allow carry in the very places you are most likely to need a gun (public transport, stadiums, etc.).  And offers NO reciprocity.  Boo.

But there is now an opportunity for law-abiding citizens with enough money (and patience to thread needles while on horseback) to leave the house with a loaded gun (within the next six months or so).  Yea!

One final quote from H.W. Brands, “In politics the ignorant and venal have as much right to their votes as the educated and upstanding.”

It’s hard to respect the Illinois State Legislature.  For starters, they’ve let over $4 Billion dollars in back bills go unpaid.  By now, you or I would have at least had our utilities shut off.  The Illinois House and Senate are made up of more ignorant and venal characters than you can shake a stick at.  And the federal Congress?  WAY too many ignorant folks there.  Representative Diana DeGette (D-Colorado) recently answered a question about laws restricting magazine capacity by saying: 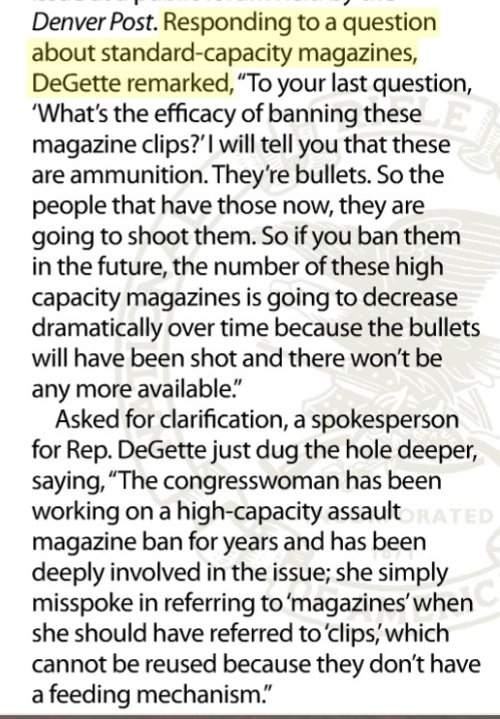 (As reported in The American Rifleman June 2013 issue)

I cannot add anything to that.

Except to say that a hungry man will eat sausage without asking how it was made.  And an enslaved people will choose to defend their liberty with guns in whatever way they can.