The right of the people to keep and bear arms shall not be infringed.

My father moved to Arizona several years ago when my mother was dying of cancer, so that she could be near my oldest sister.  My mom is gone, but because of his health and finances, my dad is still in Arizona.  The trailer park in which he lives is not an English speaking cultural center.  Living alone, except for the prescription drugs in the trailer with him, he is at risk.

Dad is former law enforcement, and still thinks there isn’t a thug or punk he can’t take down.  That would be true if all thugs and punks were over 70, and in poor health, too.  They’re not.

He does not own a gun.  He sold his duty weapon and his backup gun years ago to buy mom’s medicines.  He can’t afford one, so I offered to send him one.  Surprisingly, he agreed.  Looks like wisdom isn’t wasted on the youth after all.

The first obstacle was finding a Federal Firearms Licensed (FFL) dealer to ship it for me.  You just can’t ship guns in this country.  Then I had to find a FFL holder to

receive it.  I spent part of a day working all that out.  (I decided to send him my Hi-Point C9.  He already has some leftover 9mm ammo, and if my brother-in-law or some other family member “claims” it upon my dad’s death, I can bear the loss.  Although I’ll be pissed.)

Finally, to my astonishment, Dad asked me, “Now what do I need to do to have a gun, here?  In Illinois, I needed a FOID (Firearm Owner

Identification) card.” (He meant, The Peoples Republic of Illinoistan)

I was able to tell him that Arizona conforms to the US Constitution.  He only needed the protection of the 2nd Amendment.  He could own, bear, and even bear concealed without the State’s permission.  As a citizen of our great Republic, his right to keep and bear arms is constitutionally protected.

I frequently re-read both the Constitution and the Declaration of Independence.  (I’ve read Thomas Paine’s Common Sense more than once.  I’ve read part of the Federalist Papers.  You, too, should make yourself familiar with the legal and political foundations of our great Republic!)

As I recently re-read the US Constitution, I tarried over the 2nd amendment.

A well regulated Militia, being necessary to the security of a free state, the right of the people to keep and bear arms, shall not be infringed.

Unfortunately, there are only 4 states in which this is true.  In Wyoming, Arizona, Vermont, and Alaska, you don’t need a plastic card from the State to keep and bear arms.  In Montana you can carry on the constitution if you are outside of city limits.  In Texas you can carry a handgun in your car without State permission.

Here in my home state of Ohio, firearm ownership and open carry of handguns is protected by both the State and US Constitution.  But open carry of long guns is not, and you’ll need State permission to carry that handgun concealed.

It’s time for a nationwide recognition of the right of the people to keep and bear arms WITHOUT INFRINGEMENT.  It’s time to elect politicians who keep their promise to “Uphold and defend the Constitution”. 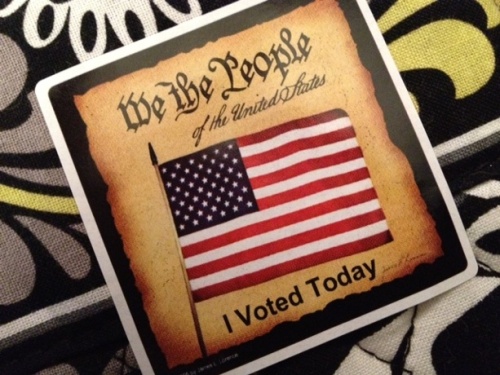