We’re all libertarians except when our benefits are threatened.

“Raven” writes, “I am on a really super tight budget – and while I don’t like it – I currently get food stamps and receive social security. I have learned how to budget these two in order to not only pay bills with the social security but take my food stamps and have food that lasts at least a month and a half in groceries. So I figured I’d finally write-up how I can do this and still be a prepper.”  http://www.thesurvivalistblog.net/prep-extremely-tight-budget-food-stamps/

She goes on to say that before the 1920’s people learned how to survive very difficult situations, and we can, too.  Does she realize that there was no government intervention in the daily survival of those people, and therefore they HAD to learn how to take care of themselves?

Let’s look at the Preamble to the U.S. Constitution:

We the people of the United States, in order to form a more perfect union, establish justice,insure domestic tranquility, provide for the common defense, promote the general welfare, and secure the blessings of liberty to ourselves and our posterity, do ordain and establish this Constitution for the United States of America.

Notice that the legal framework for our government is meant to PROVIDE for the common defense, and only to PROMOTE the general welfare.  Doing this will SECURE THE BLESSINGS OF LIBERTY TO OURSELVES AND OUR POSTERITY.  We’ve got it backwards. We have a government which only promotes the common defense, but chooses to provide for the general welfare.

Let’s face an obvious fact:  the government does not produce anything, and therefore has no income.  The money that the local, state, and federal bureaucrats give to

some of our citizens is taken from other, producing, citizens at the point of a gun.  If you don’t believe me, just try not paying taxes.  The men who show up at your door someday will be wearing guns.  If you take government money, you are taking what someone else has earned – without their permission, and are contributing to the loss of the blessings of liberty to ourselves and our posterity.

The government was not formed in 1787 to provide me or you with disability payments, social security payments, food stamps, aid to families with dependent children, or free cell phones.

Folks, we are in danger of losing our freedom, and those who keep sucking at the government teats are a part of the problem.  Let’s stop the erosion of our liberty while we still have some liberty to lose.  Soon we’ll all be slaves.  We’ll work at government appointed jobs, and eat government provided food, getting our evening news from government approved outlets, and complaining to our friends on government managed social media.

Remember what happened in 17 states when the SNAP program briefly shut down last October.  Just take a look at what happened in Greece in the last week;  those riots will soon be in our streets – rioters whose “benefits” are diminished.

Oh yeah, and provide for your own defense just in case. 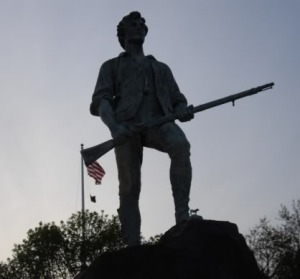