Jesus would pack, and keep handy, a bug-out bag.

And it would contain, among other things, some form of currency, clothes, and a handgun.

Look at what He said:

Luke 22: 36 Then said he unto them, But now, he that hath a purse, let him take it, and likewise his scrip: and he that hath no sword, let him sell his garment, and buy one.

Matthew 24: 16 then let them which be in Judea flee into the mountains: 17 let him which is on the housetop not come down to take any thing out of his house: 18 neither let him which is in the field return back to take his clothes.

It’s as plain as the nose on your face – Jesus would have a bug-out bag.

I won’t use the space here to tell you what to have in your bug-out bag, I will only say that you should have one.  Jesus would.  And it would contain a 9mm semi-auto or a .38 caliber revolver.  Apologies to all of you .45 caliber carriers.   The word he uses for sword is machaira.  It’s a small sword, as distinguished from a large one, according to Vine’s Expository Dictionary. 9mm in today’s parlance.

When trouble comes, you may not have time to gather supplies even if you’re at home, and you won’t have time to go home for supplies if you are at work.  Pack a bug-out bag and keep it handy.  It will do you no good in your shed or even in a closet.  Pack it now, and keep it with you.  Jesus would.

(My BOB contains not only a defensive handgun but a “backpack” rifle/shotgun combo for food harvesting.  You might consider it as well.) 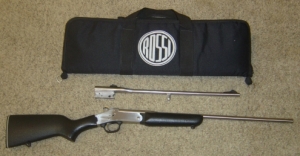