More Force May Not Be The Answer

We’ve come to the last of the 5 pillars of a self-defense claim.  You are innocent, the danger is imminent, you’ve tried to avoid it, you are a reasonable person, and now you have to use force.  Proportionality.

A  definition of force might be:  touching of the body of another, to include confinement.  So, holding on to someone at the elbow, in what may be called an “escort hold” is force.  Pushing someone back would be force.  Hitting someone is force.  And the law allows you to meet force with a proportional force.

Normally, non-deadly, unlawful force cannot be met with deadly force.  In general, if someone is pushing, grabbing, or even hitting you, you probably cannot pull out your gun and begin shooting.  But things might change…

Or if there is a disparity of force –  multiple attackers, or a very large or strong attacker, and you are a woman or old man – then you may be in deadly force territory.  And don’t forget

that if you carry a gun for self-defense, then there is always a gun in the fight, and the possibility of deadly force.  Just because the gun is yours, doesn’t preclude the attacker from trying to get it, and then you would be in deadly force territory.

The question always reverts back to whether or not you are innocent and in imminent danger of death or serious bodily harm.

You should know the concept of a “force continuum”. 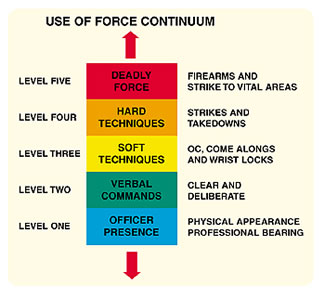 When a threat is presented, you move up the scale from presenting yourself as capable of dealing with it, to strong verbal commands, followed by touching the body of another, then non-deadly force, finally using deadly force.

Using these steps will enhance your self-defense claim should use deadly force.  Witnesses should be able to testify that you moved up the force continuum, and were forced to use your gun to end the threat.

It is said that when you only have a hammer, every problem looks like a nail.  So carry something besides your gun – some non-deadly force.  Pepper spray is more often carried

by those who want something non-deadly.  It can bolster your claim that you did all you could to stop the attack before you resorted to deadly force.  Just be aware that pepper spray, however unpleasant, can be ineffective if you don’t hit the target in the eyes, nose or mouth.  And as the spray disperses, you can be affected as well.

You might also carry a kubotan on your key ring.  While it’s only effective at bad-breath distances, it might provide you some space to get to your handgun if the attack continues, as well as demonstrating that you followed the force continuum, and, because the attack continued, considered yourself in imminent danger of death or great bodily harm.

First you have to have a gun with you.  Then you have to live your life as an innocent person, aware of your circumstances. Finally, learn to deal with unlawful, physical force by moving up a force continuum from strong verbal commands, through non-deadly physical force, and then to deadly force.  At that point, remember, front sight – press.