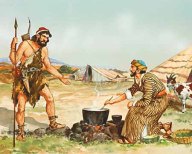 In Genesis 25 we read the tragic story of Esau trading his birthright for a bowl of soup.  As the firstborn son, he had a right to inherit his father’s household and become the new master.  But when given a choice between enduring the condition of hunger, now, or possible servitude later – well, later might not come, so let’s eat.

They were as good as their word.  They received many suggestions for commonly agreed upon human rights which should be included, and by re-wording some and combining others, they presented to the people 12 rights, 10 of which were ratified and became part of the

But nowhere, were these understood to be rights created by the US Congress – they were birthrights given by an eternal Creator.

Your birthright is the right to keep and bear arms.  And to the extent that any government, or business, or persons prevent you from owning a gun and carrying it with you in the course of your daily life, they are trampling on your birthright.