“Bench” shooting is fine for testing out ammunition.  But it’s not real shooting.  Especially

if your rifle is locked in a Lead Sled.  Booo!  There are 4 classic rifle positions, and certainly many “field expedient” variations.  And in every one – YOU ARE THE RIFLEMAN!  Not some overpriced rifle holder. 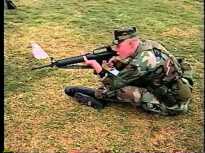 I have decided to work on all 4 positions this year, starting with the sitting position.

During marksmanship training while attending Marine Corps bootcamp, we spent HOURS, “snapping in”:  that is acquiring the proper position and training our bodies to hold that position for shooting.  Now, I’ll try to repeat that process, but with a body that is 40 years older.

You can see from the above picture of some un-named Marine what it should look like.  That’s where we want to be by December.  Here’s where we are:

In the Marine sitting position, BOTH elbows should be resting on my legs just below the knees. I seem to have one that’s “airborne”.  And as for getting into the position – well, you’re supposed to cross your ankles and just sit down, catching yourself on your non-shooting hand.  Mostly I just START to sit down, then gravity takes over, and I catch myself on my back and roll backward onto my shoulders.  Then sit back up.  Not very graceful, but there you have it. 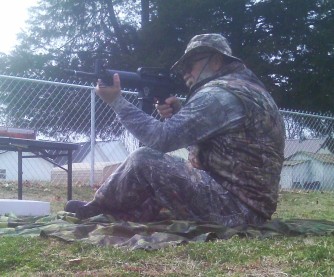 I’m using my Air Venturi replica M4 BB gun.  As I’ve said before, it’s nearly the same weight as my AR-15, has A2-style sights, and, except for the recoil (which there is none), is so similar to my AR-15 that, the first time I fired it, I waited for the sound and recoil and, at first, thought I’d had a misfire.  It’s pretty cool.

And these are the results.  It’s a little hard to tell, but that is 15 shots, representing a 73 out of a possible 75 for a score.  I’m using a human silhouette target on 8 1/2 X 11 paper.  The distance is 10 yards (30 feet), which is nearly twice the distance of NRA BB gun competition distance (5 M / 16 ft 4.75 in.).  Because BB guns are smooth bore,  they are not tack drivers, but this one, with sights which are adjustable for windage and elevation is pretty accurate.  I’m pleased with it.

And finally, yes, my back and knees are complaining.  But perhaps after a few weeks of this they will just go along with the program.  I haven’t told them what they will have to do in the kneeling position – and don’t you.  They’ll mutiny.